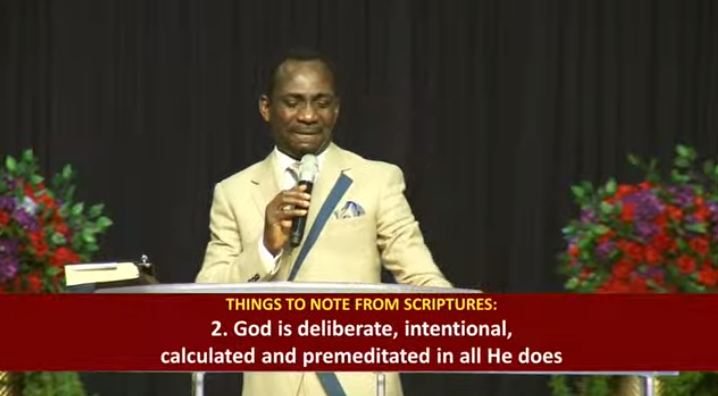 Of course, there are a lot of people who are always giving prophecies and all of that.
Nevertheless, there are certain servants of God that we give great attention of what
they say, because we know they are truly of GOD. One of such is Dr. Paul Enenche.
He is the founder and Senior Pastor of Dunamis International Gospel Centre. By the
grace of God, he also released certain powerful prophetic declarations for the year
2022 at the beginning of the year.

1. A generational crown belonging to a people that got lost had been found and there
was jubilation – Something that was lost in your lineage; a generational mantle that
the devil tried to take from your father’s house has just been released just now!
2. There will be the rising of godly homes and godly marriages for those who will
wait on God’s counsel; marriages of men and women that will correct the notion that
godly marriages don’t exist anymore, will be raised in this season!
– Every daughter or son of Zion whose time is due for marriage shall be settled this
year!
3. There shall be the reversal of destiny exchanges
The revelation received was of a family of a man who was influential before and the
man died and 60%-70% of the children were grounded and crawling on the ground; it
was as if the man’s greatness was achieved at the expense of his children’s destiny

PRAYER: In the name of Jesus, I refuse and reject every transaction in my lineage
that tampered with my life and welfare in the earth; oh you demonic transaction, you
are nullified, neutralized and destroyed by the Blood of Jesus and the fire of the Holy
Ghost now! Paul Enenche Prophecies
4. There shall be explosion of revival in rural areas – communities, villages; there
shall also be the digging of the wells of revival and the move of God in places that
had revival before and it disappeared! There shall be the experience of the power,
glory and Spirit of God as it was in the past and even beyond.
5. There shall be the speeding up of things because the time is short; the Lord is set to
do a lot of drastic work with as many as are ready – apostolic work, prophetic work,
massive financial releases!
6. There will be a great demarcation between those who are serving God in truth and
reality and those who are not serving Him.
7. There will be so much investment and entrustment of Divine resources to those
who can be trusted and who are truly faithful – be it in the realm of the anointing,
power, or financial resources.
8. It is a season of great acceleration and accentuation of things.

Note that Pastor Paul Enenche gave the prophecies at the crossover service which was
held at the Glory Dome in Abuja some months ago. He christened the year as
‘Overflowing Grace and Glory’. The man of God also declared war on every killer in
this country. He prayed for the people of God, pronouncing that our blood won’t be
wasted, and that every enemy of this country shall not cross this year
As stated before, while there are several people usually saying different things, we
still have genuine men of God like Dr Paul Enenche that we can give attention to,
knowing very well that they are not just after attention or what have you, but are
keenly interested and committed to pleasing the LORD.

This of course should encourage us to get closer to God, so His good promises over
our lives will come to pass. You know, in the Word of God, the LORD made it clear
to us that He knows the thoughts He thinks towards us, that they are usually thoughts
of good and not of evil, and to give us a good end and good success. God is a good
God and Father, and He is always interested in our pleasantness. You can always be
sure that He wants the best for you and I this year and beyond. Hence, He is always
speaking good and delightful things to us.
Yes, irrespective of what is going on with you and around you right now, don’t forget
that God only wants the best for us. He is working all things for our own good.
So, you should give God thanks and praise for all of these beautiful promises,
including what He has made known through His servant Paul Enenche. If you have
gone through this Paul Enenche prophecy, you should see already that God is really
good and that He wants nothing but the very best for we His children.
Now, you should be encouraged to serve God in spirit and in truth. These things
should make you do away with any sinful venture holding you back from serving
God, and giving yourself fully to God. This is a time of making the decision to allow
Jesus Christ reign supreme in our lives and to be of Christ alone. It is always for our
own good if we give ourselves to the LORD and allow Him be our all in all. And God
will keep helping and blessing us, in Jesus Name. Amen Paul Enenche Prophecies