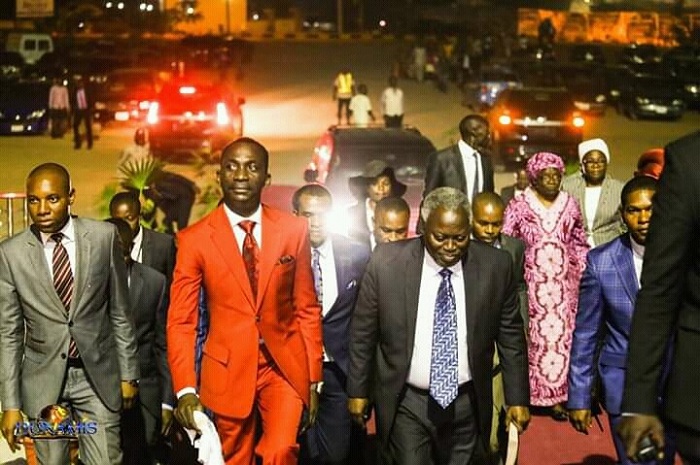 As we should all know already, Dr. Paul Enenche and Pastor W.F Kumuyi are two God’s Generals that have been used vehemently by God, and are still used. While Pastor Kumuyi is the one God used to establish Deeper Christian Life Ministry, Dr. Paul Enenche is the Senior Pastor of Dunamis International Gospel Center.

Both are men of God which He keeps using vehemently, and there are a lot of things to say about them.

However, one of the remarkable things that brought them together again was when Pastor Kumuyi ministered at Pastor Paul Enenche’s church in 2018.

It was the Grand finale of the Kingdom power and glory world conference that took place at the Dunamis International Gospel Center newly built 100,000 seater auditorium.

Actually, a member that was at the program gave a firsthand information about what God did through Pastor Kumuyi’s ministration at the conference.

According to him, God used Pastor Kumuyi to do great miracles at the programme which was themed COME UP HITHER. Pastor Kumuyi preached on COME UP HITHER AND GO UP HIGHER, and after introducing the title, the Man of God divided the message into three subheadings, which are:

Point 1. Get up from Revelation to Restoration

Point 2 Go up from Revelation to Resurrection

Point3 Grow up from Revelation to Realization

After the message, Pastor then made an altar call and thousands of people poured out to surrender their lives to the LORD Jesus Christ. When Pastor Kumuyi led them to Christ, he informed the congregation that they should get set to dance, because there is going to be an explosion of Miracle

Pastor Kumuyi said a short prayer, and after the last Amen, things began to happen to the Glory of God.

According to the withness, “The lame began to drop their crutches, the mad people began to recover, the paralyzed began to run, the deaf began to hear. In fact, I cannot fathom the depth or the extent of the miracles that happened in Dunamis”

He added that the Miracles were incredible, and Pastor Paul Enenche had to come and give a hand shake to Daddy Kumuyi telling him to come back again.

It was added that there was a woman that have not walked for the past 22 years ago, but she began to walk and run. She said after the prayers, she saw some beings on black attires going out from her leg and that’s when she began to walk.

All these made the withness to exclaim: “It was all wonderful!”

Then, Pastor Paul Enenche led the congregation into another realm of dancing to fulfill the prophecy given by Daddy Kumuyi, and God honoured His Name among the brethren.

Many Members, One Body

Actually, the church of Christ is one. Yes, there are various denominations quite alright, but we must always remember that the Lord never want a divided Church. We are one in Christ, and there is no division in Christ. In fact, there is no denomination in Heaven, but we all are Christ’s.

It is a good thing that church leaders like Dr. Paul Enenche and Pastor Kumuyi are working together for the spread of the gospel. The Church is One! And the Gate of Hell cannot prevail! Amen!